Alcibiades, son of Cleinias, from the deme of Scambonidae (c. 450 – 404 BC), was a prominent Athenian statesman, orator, and general. He was the last famous member of his mother's aristocratic family, the Alcmaeonidae, which fell from prominence after the Peloponnesian War. He played a major role in the second half of that conflict as a strategic advisor, military commander, and politician.

During the course of the Peloponnesian War, Alcibiades changed his political allegiance several times. In his native Athens in the early 410s BC, he advocated an aggressive foreign policy and was a prominent proponent of the Sicilian Expedition, but he fled to Sparta after his political enemies brought charges of sacrilege against him. In Sparta, he served as a strategic adviser, proposing or supervising several major campaigns against Athens. In Sparta too, however, Alcibiades soon made powerful enemies and felt forced to defect to Persia. There he served as an adviser to the satrap Tissaphernes until his Athenian political allies brought about his recall. He then served as an Athenian general (Strategos) for several years, but his enemies eventually succeeded in exiling him a second time.

The Sicilian Expedition was the idea of Alcibiades, and scholars have argued that, had that expedition been under Alcibiades's command instead of that of Nicias, the expedition might not have met its eventual disastrous fate. In the years when he served Sparta, Alcibiades played a significant role in Athens's undoing; the capture of Decelea and the revolts of several critical Athenian subjects occurred either at his suggestion or under his supervision. Once restored to his native city, however, he played a crucial role in a string of Athenian victories that eventually brought Sparta to seek a peace with Athens. He favored unconventional tactics, frequently winning cities over by treachery or negotiation rather than by siege. Alcibiades's military and political talents frequently proved valuable to whichever state currently held his allegiance, but his propensity for making powerful enemies ensured that he never remained in one place for long; and by the end of the war which he had helped to rekindle in the early 410s, his days of political relevance were a bygone memory.

The origins of this bust are unknown. 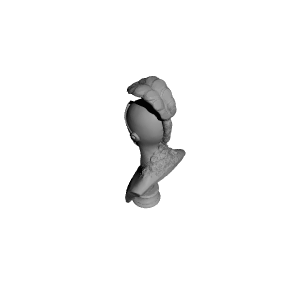 ×
1 collections where you can find Alcibiades par Scan The World