'The Sign of the Aquila is a universal hand gesture used to show one's allegiance to the Imperium of Man, and is known to every citizen within its boundaries. It is used as a respectfully neutral greeting or farewell gesture, mainly when one is unsure of the recipient's rank and/or the proper etiquette in the given situation. There is some debate as to how the gesture is made: the Sign of the Aquila has its user place their hands flat on their chest with their thumbs interlocked. This forms the image of the Imperial Eagle on the chest with the thumbs forming the heads and the straight fingers symbolising its wings. The Aquila gesture is often accompanied by a nod or slight bow.' - Warhammer 40,000 Wiki

Designed to be free standing or wall mounted.

Scale up and down to your preference. 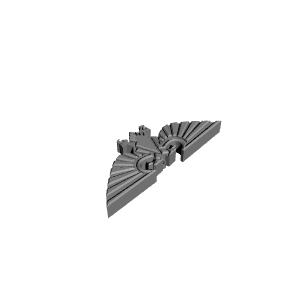 ×
14 collections where you can find Aquila par brunojota