This is a marble sculpture of Artemis, known to the Romans as Diana, standing with her weight on her left leg, her right foot trailing. She wears a short chiton, appropriate to her role as a goddess of the hunt, a finely wrought diadem, and elaborate sandals. Originally, she would have held a bow in the left hand. In other statues of similar type, the goddess is striding, but here, she stands as if in an epiphany, an impression that is emphasized by the high classicizing style of the figure, with its wind-blown drapery and strong idealized features. 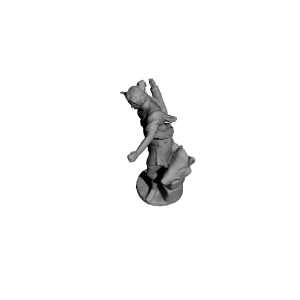 ×
2 collections where you can find Artemis par Scan The World