This bust is a cropped version of a full-figure marble that depicts the Biblical prophet Habakkuk. The work was commissioned for the Duomo in Florence and was completed between 1423 - 1425.

The name, Zuccone, originates from the long and angular shape of the figure's head, translating to 'Pumpkin' in Italian.

The spectacularly life-like statue is fraught with tension and clad in the flowing robes that are typical of most of Donatello's prophets. His face is tilted slightly down which gives the figure a humble expression upon his gaunt face.

The legend of Habakkuk appears in the Hebrew bible. Very little information is revealed about the prophet. This allowed Donatello more artistic freedom then was typical with other statues that had more clearly defined histories. Habakkuk's legacy in text was slightly unusual in that he was one of the only prophets to question God and the injustices God allowed. Donatello must have been inspired by this information when he created his statue's melancholy and questioning eyes.

Lo Zuccone was reportedly one of Donatello's favorite pieces. Vasari would later recount Donatello's affection for the statue, stating that while he was working Donatello would stare at Zuccone's face muttering, "Speak, damn you, speak!" 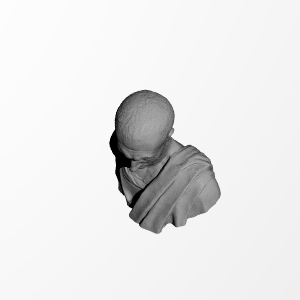