This head of the Roman emperor Claudius (41-54 AD) is of a type typical to the Julio-Claudian dynasty. The triangular shape of the head with short, layered hair which frame the forehead give a certain dominance to the portrait. With the deep-set eyes and animated forehead wrinkles, paired with the deep furrows of the cheeks, the head has a striking sense of realism.

This is one of the warmest and most lively depictions of the emperor Claudius, whose image and personality have been in the process of continuous rehabilitation over the last half a century.

The original sculpture is housed in the Duke Anton Ulrich Museum (ORIG363)., but a similar head in bronze is housed at the Louvre (cat. no. 432) 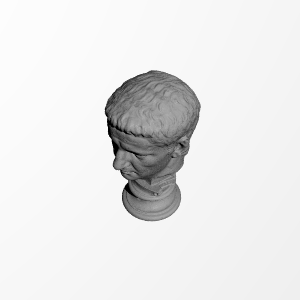