Fatherly Silenus with the young Dionysos

Fatherly Silenus with the young Dionysos

Roman copy of a statue by Lysippos. Lysippos was a Greek sculptor of the 4th century BC. Together with Scopas and Praxiteles, he is considered one of the three greatest sculptors of the Classical Greek era, bringing transition into the Hellenistic period.

Silenus was the old rustic god of wine-making and drunkenness. He was the foster-father of the god Dionysos who was entrusted to his care by Hermes after his birth from the thigh of Zeus. The young god was raised by Silenus and nursed by the Nysiad nymphs in a cave on Mount Nysa.

Once, when Dionysos was travelling through Phrygia, Silenus became lost and was captured by King Midas. The king treated him hospitably and as a reward Dionysos granted him his golden touch.

Silenus was the father or grandfather of the tribes of Satyroi (Satyrs) and Nymphs. He was sometimes multiplied into a triad or large band of Seilenoi (Silens). He was depicted as a jovial old man, hairy and balding, with a pot-belly, snub-nose, and the ears and tail of an ass. He rode in the train of Dionysos seated on the back of a donkey. Silenus was, in essence, the spirit of the treading dance of the wine-press, his name being derived from the words seiô, "to move to and fro," and lênos, "the wine-trough." 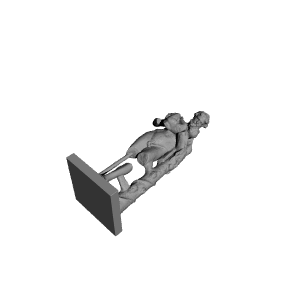