Rhamnous was an ancient Greek city in Attica situated on the coast, overlooking the Euboean Strait (Greece); its impressive ruins northwest of the modern town of Agia Marina in the municipality of Marathon. The well-preserved Attic site was best known in antiquity for its sanctuary of Nemesis, the implacable avenging goddess, her most important place of worship in ancient Greece.

Understanding the history of Rhamnous was greatly improved by the work of Jean Pouilloux, who studied the fortress and the inscriptions from the site. At the site, two temples to Nemesis and Themis are situated close together. As the "Goddess of Rhamnous", Nemesis was honoured and placated in an archaic sanctuary in the isolated district of Rhamnous, in northeastern Attica.

The cella of the large temple to Nemesis housed a cult figure of the goddess, sculpted by Agorakritos, a pupil of Phidias, from the block of marble alleged to have been brought by the overconfident Persians for their triumphal stele. This famous statue of the goddess stood within the cella of the temple and was around 4 metres high. The Roman historian Varro rated it the finest example of Greek sculpture.

The badly damaged remains of an over life-size marble head from a cult statue of Nemesis, with perforations for attaching a gold crown, was discovered by the British architect John Gandy in the early nineteenth century and is now part of the British Museum's collection. This has a stylistic similarity to the pediment sculptures of the Parthenon of 440-432 BC.

Many parts of the original statue have been recovered and reconstructed from the hundreds of fragments found scattered about after the destruction of the cult image by early Christians, and this allowed the identification of a total of eleven Roman copies on a smaller scale. The base of the statue, approximately 90 cm high and 240 cm wide, has also been reconstructed; on three sides of the base, the nearly-in-the-round scene shows the presentation of Helen to her mother Nemesis by Leda. 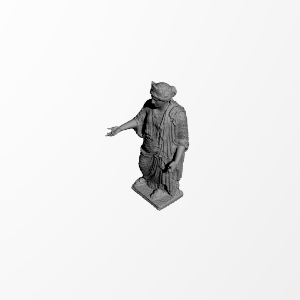 ×
1 collections where you can find Female Divinity, Nemesis of Rhamnous Type par Scan The World