This is a copy of a fragmented head made from Parian Marble of an overall statue of Nemesis. The cast still shows perforations at the top of the head for the attachment of a metal crown. The original is housed in The British Museum (1820,0513.2).

Though the rest of the original Greek statue has not survived, many Roman copies were made to emulate the over life size cult statue of Nemesis. The statue of Nemesis at Rhamnus (where the temple of Nemesis stood) was described by Pausanias (Description of Greece, 1.33.2-8). The metal crown is described as being decorated with deer and small images of victory.

In ancient Greek religion, Nemesis ("the goddess of Rhamnous"), is the goddess who enacts retribution against those who succumb to hubris (arrogance before the gods). Another name is Adrasteia (or Adrestia), meaning "the inescapable". 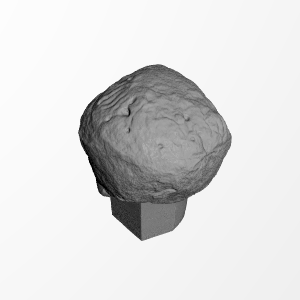