Atop this bad-relief is a relief with a figure and monsters in sctrolling foliage .The fabled monsters of antiquity take pride of place here; on the main panel, a centaur (half man, half horse) aims his bow at a harpy (body of a bird with a woman's head). On the short sides, a hunter is caught between two monstrous birds, and a basilisk bites its own tail.

The relief below depicts King David tuning his harp. King of Israel, Davif was also a musician and a poet and in the Middle Ages was reputed to be the author of the Psalms (a book from the Old Testament). As such, he is frequently portrayed with a harp. At that time, music was considered both a mathematical science and a path to wisdom. As a king and musician, David was familiar with the mathematical laws that governed the world created by God. Here he is not playing but tuning his harp. His role is to create harmony.

Psalm 150 urges believers to praise the Lord with music and dance. David is, however, most commonly depicted on early Gothic portals in the Íle-de-France region as direct ancestor to Christ, so as to extol his royal descent.

David is directly carved into the same block of marble as the column supporting him. Thus he appears to be projected outward. The costumes and the way the fine detailed drapery is rendered add to the verticality of the whole.
By tuning his harp, King David organises the world in harmony under Christ’s law. He thereby provides the model of a Christian king, all the quicker to praise the Lord as he has been chosen by Him to reign over His kingdom on earth.
Like on the embrasures of Gothic portals, the kings and queens of the Old Testament stand side by side with the patriarchs and prophets announcing the coming of Christ.
The Queen of Saba with her gifts and King Salomon thus prefigure the Adoration of the Magi. 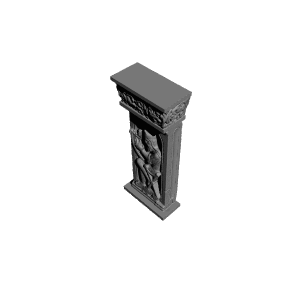