Group with Satyrs and a Nymph

Group with Satyrs and a Nymph

A trend in Hellenistic sculpture, associated with the city of Pergamum in Asia Minor, whose great period coincided with the Attalid dynasty (241–133bc). Works of the Pergamene School are characterized by an exaggeration of the general tendency of Hellenistic sculpture towards emotional display and virtuoso naturalistic detail. They include a series of Dying Gauls (the most famous is in the Capitoline Museum, Rome) that have been identified as copies of statues dedicated by Attalus I (reigned 241–197bc) to celebrate a victory over the Gauls, and the Great Altar of Zeus (c.180–150bc, Pergamum Museum, Berlin), which features relief carvings of the fight between gods and giants depicted with an extraordinary sense of movement and dramatic tension. It is perhaps the ‘Satan's seat’ of Revelation 2: 13. Other Hellenistic works from places other than Pergamum (above all the celebrated Laocoön) are clearly similar in their restless energy, and some scholars deny that there is adequate reason for recognizing a separate Pergamene School. However, T. B. L. Webster in his Hellenistic Poetry and Art (1964) maintains that although the artists employed by the Attalid kings came from various places, they ‘achieved a unity of style which justifies the name Pergamene’. 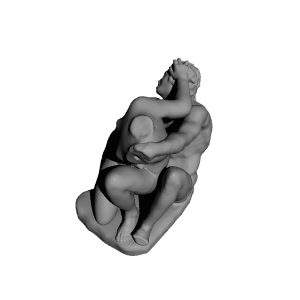