Refined Augustan version of archaic models dating back to the late sixth century.

Priapus is a god of fertility, protector of horticulture and viticulture. His statue, holding a wooden sickle in his hand, was used in the Roman gardens as scarecrow, and his enormous penis as a threat against thieves. This god is mainly known for his huge virile member, and the size of it is so enormous that it has been called "column", "twelve-inch pole", "cypress", "spear", "pyramid", and many other names of the same kind referring to the dimensions of his penis. 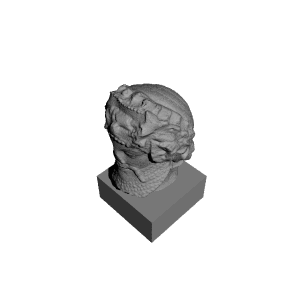