This model was created fully in Tinkercad by MiniWorld3D founder Dany Sánchez as part of Khamsa 3D's American roadtrip.

Among the most well-known landmarks in both California and the United States, the Hollywood Sign has come to represent the film industry, movie stars, glamour and the bustling life in Los Angeles. It makes frequent appearances in popular culture, particularly in establishing shots for films and television programs set in or around Hollywood. Signs of similar style, but spelling different words, are frequently seen as parodies.

It is situated on Mount Lee, in the Hollywood Hills area of the Santa Monica Mountains. Spelled out in 45 ft (13.7 m)-tall white capital letters and 350 feet (106.7 m) long, it was originally created in 1923 as a temporary advertisement for a local real estate development, but due to increasing recognition, the sign was left up (from Wikipedia).

MiniWorld3D is excited to bring this model to life as a nod to the people of Los Angeles and movie lovers worldwide. This model was made in Tinkercad by remixing an existing hill model and extruding vector graphics of the letters. This version is made for 3D printing. Please give credit, it's all about spreading culture and education!

Easy print, no supports required. Use best quality possible or scale up for better details.

Every letter in the sign has been supported already. 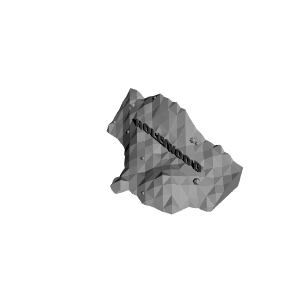