The golden hand of the Kingslayer, Jaime Lannister.

Ser Jaime Lannister is the eldest son of Tywin, younger twin brother of Cersei, and older brother of Tyrion Lannister. He is involved in an incestuous relationship with Cersei, and unknown to most, he is the biological father of her three children, Joffrey, Myrcella, and Tommen.

Jaime previously served in the Kingsguard of Aerys Targaryen, known as the Mad King, before infamously backstabbing him during the Sack of King's Landing, earning Jaime the nickname of the Kingslayer.

On fdm printers its preffered to print on 0,1 and higher for best detail.

The object DOES NOT require support material. 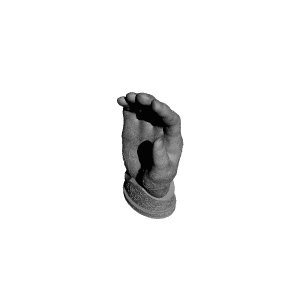 Fotis Mint has already seen these, but I figured I'd share them here for folks to check out. This was printed with some super-duper-extra-cheap translucent yellow PLA, 130% scale, 0.2mm height, 5 walls, and *no infill*. It's completely hollow, and will be the topper for this year's Game of Thrones-themed Christmas tree. Thanks again, Fotis Mint! :-)

Printed at 0.1 10% infill in ABS. Next time I want to print this in 1:1 scale (as close as I can work out) it was smaller than I thought when it was completed. I used XTC Smooth-On and a light sand before prime and paint.

Finally had some time to paint mine, awesome model!