Laocoon and His Sons

Laocoon and His Sons

An icon of Hellenistic art, the figurative Greek sculpture known as the Laocoon Group, or Laocoon and His Sons, is a monumental statue which is on display at the Museo Pio Clementino, in the Vatican Museums, Rome. It is a marble copy of a bronze sculpture, which - according to the Roman writer Pliny the Elder (23-79 CE) - depicted the Trojan priest Laocoon and his two sons Antiphas and Thymbraeus being killed by giant snakes, as described by the Roman poet Virgil (70 BCE - 19 CE) in his epic poem the Aeneid. The statue, which was seen and revered by Pliny the Elder in the palace of Titus Flavius Vespasianus (39-81 CE), the future Roman Emperor Titus (ruled 79-81), was attributed by Pliny to three sculptors from the Greek island of Rhodes: Hagesander, Athenodoros and Polydorus. This attribution coincides with an inscription on a fragment from other similar marbles discovered separately from the Laocoon itself. Despite persistent uncertainty as to its date and details of its original provenance, Laocoon and His Sons is considered to be one of the greatest works of Greek sculpture of the Hellenistic Period.

Cast from the original (ORIG1563) housed at the Museo Pio Clementino. Restorations have been made to Laocoon's extended arm, a matter of debate amongst academics. Acquired in 1898. 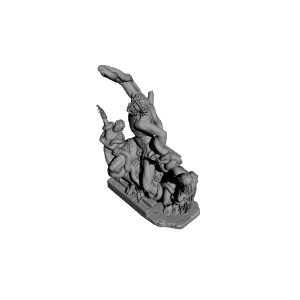 ×
47 collections where you can find Laocoon and His Sons par SMK - Statens Museum for Kunst
×
Peter Griffin
@despResT
1
Printed on: Prusa i3 MK3
Material: PLA
Posted at: 30th January 2019

Definitely a nice print, quite difficult to get rid of all the support but totally worth it!

Great scan but the fingers and that arm on the left are so hard to remove from support. The arm snapped no matter how careful I was. In the end after multiple attempts, I just welded it back. Printed here at 15CM, .4mm layer height.

Printed in Stronghero3d Wood PLA and stained with Minwax Mahogany.

I wanted a faux bronze copy of the group like one I'd seen in an upscale antiques shop. I imported the model from here into Meshmixer where I hollowed it and scaled it to 500mm. It was too big to fit into my printer so I used Luban to chop it into smaller blocks. I then printed everything out. After assembling it I realized it was very difficult to sand. I worked at it but finally decided it was good enough, even though I could still see layer lines in many spots. To simulate bronze I used a dark gray base, then a dark green, followed by numerous thinned layers of glossy black. I need to apply a sealant and it'll be finished.