This colossal kneeling statue shows the queen wearing the traditional nemes headdress and false beard, offering two jaws of milk or water. Her name, Maat-ka-re is inscribed in the cartouche above the buckle of her belt. This kneeling position, while presenting jars of offerings, is commonly seen in representations of New Kingdom kings and queens. The oldest such statue of this type is of Pepi I, sculpted in green slate, now on display at The Brooklyn Museum. Other kneeling statues show royalty presenting an offering altar or a Naos of a god's statue.

Emphasizing physical statue, the statue boasts large shoulders and powerful muscles, which in turn minimizes the feminity of Queen Hatshepsut. The curves in the body and feet help to imbue to statue with naturalism.

The statue is made from Red granite, was excavated from Deir el-Bahri, and dates from the 18th Dynasty. The work can be found on the Ground Floor (Gallery 7) of the Egyptian Museum in Cairo. NB. The thumbnail of this image depicts a very similar work from The Metropolitan Museum of Art and not the version in Cairo. 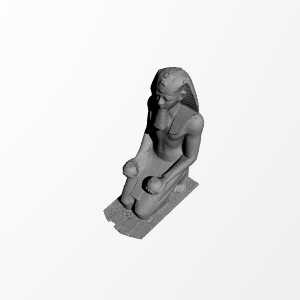