Jupiter once had an affair with one of his wife Juno’s priestesses, but Juno found out and punished the priestess by turning her into a heifer, which she let a monster called Argus guard. Jupiter therefore asked his son Mercury, the flying messenger of the gods recognizable by his winged hat, to help with freeing the priestess. This was a difficult task as Argus had eyes all over his body. Cunningly, Mercury offered to play his shepherd’s pipe for Argus. Mercury played for so long that Argus eventually became tired and closed his many eyes. It is this exact moment that Mercury is about to take advantage of by killing Argus with his sword. 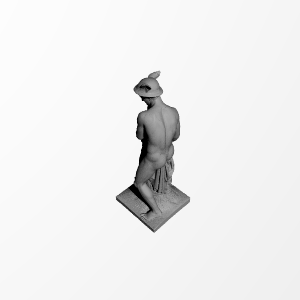