The relief belongs to a class of so-called "three figure reliefs" in Classical Greek style (5 B.C.). Most of these, however, have been found at sites in Italy, and thus may have been produced by Greek artists for an Italian art market, ca. 100 BCE-100 CE.

Five full copies and two partial ones of the Orpheus panel are known; our cast is of the relief in the Naples Archaeological Museum, Italy, either an original of the 1st c. BCE/CE or a copy of a Greek original of ca. 420 BCE. On the Naples relief, the name of each figure is inscribed at the top of the scene in Greek (Orpheus is written backwards, or retrograde).

This cast adapts the marble relief in Naples -- Orpheus's foot is slightly angled. One theory, now discredited, is that the original of this relief once decorated the Altar of the Twelve Gods in the marketplace (Agora) at Athens.

Our panel shows Orpheus, Eurydice, and Hermes (the Roman Mercury).  According to myth, Orpheus was a son of Apollo and a famous singer who lived in Thrace in northern Greece - his song could charm human beings, wild animals, and even inanimate objects like trees and rocks. His wife, Eurydice, was playing with her companions when she stepped on a serpent that bit her: she died. Hermes, conductor of dead souls to the Underworld, led her "shade" into the realm of Hades and Persephone. Orpheus refused to accept the loss, and followed the shade of his wife. Persuaded by his music, Hades agreed to return Eurydice to the land of the living, as long as Orpheus, while leading her spirit back to the upper world, did not look back at her. At the threshold to the upper world, however, Orpheus hesitated and turned - Eurydice was forced to die a second time.  In sorrow, the singer turned away from the love of women and became exclusively homosexual. Infuriated, the wild women (maenads) of Thrace tore him to pieces and threw his head in the river; it floated downstream and out to sea, still singing.

Hermes stands on the viewer's left, and can be recognized from his traveler's hat (petasos) and cloak (chlamys) pinned at the right shoulder, leaving the right arm bare. He wears a short tunic belted at the waist. With his left hand he holds the right wrist of Eurydice, who is not only the central figure but also the visual focus of the composition. She stands with her weight on the left leg; the right is free and trailing. Her left hand is raised to the shoulder of her husband, as if to comfort him. Eurydice wears a Classical peplos, a simple dress pinned at each shoulder, with an overfold that covers her belt; over the left leg, the skirt forms closely-spaced vertical folds, like the flutes of a column. A veil completes her costume, and frames her face and downcast eyes. Both Eurydice and Hermes wear sandals with carved soles; the straps would have been painted. Orpheus at right balances the figure of Hermes in a near mirror-image pose (his right hand is raised, however, to touch the hand of Eurydice on his shoulder), and he wears high boots. The singer wears a peaked Thracian cap to indicate his northern origin (his face is restored), and he grasps his lyre in the left hand: the instrument is difficult to recognize, since it appears in profile. The pathos of the scene depends largely on the pose and gestures of the three figures, but as spectators we sense the tragic outcome of the story. L.-A. Touchette, however, has suggested a new interpretation - that Eurydice is shown returning to her husband.

It is more likely, however, that Hermes has grasped Eurydice's wrist, much like a bridegroom grasps his bride, using a conventional gesture of possession (cheir' epi karpo) in order to take her back to Hades. 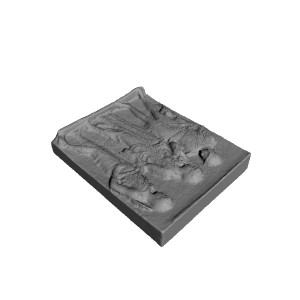 ×
1 collections where you can find Orpheus Relief with Hermes, Eurydice, and Orpheus par Scan The World