'The incoming and receding tides made strange and wonderful calligraphy on the pale granite sand which sparkled with feldspar and mica. The rich mineral deposits of Cornwall were apparent on the very surface of things: quartz, amethyst and topaz, tin and copper below in the old mine shafts, and geology and pre-history – a thousand facts induced a thousand fantasies and forms and purpose, structure and life, which had gone into the making of what I saw and what I was’ (B. Hepworth, quoted in H. Read, ‘Barbara Hepworth’, in exhibition catalogue, Barbara Hepworth, New York, Marlborough-Gerson Gallery, 1966, n.p.).

Moving to the Cornish coast in 1939, with her then husband Ben Nicholson, Hepworth became bewitched by the wild beauty of the place, captivated by the weathered cliffs and headlands, the magnificent monolithic stones and stormy seas, which lapped upon remote shores. Her admiration for her surroundings can be seen to striking effect in Oval Form (Trezion) with the artist creating a wonderfully organic, furling form, which speaks of her environs. It is also apparent in her title, with 'Trezion' referring to the house she shared with Nicholson in St Ives. Cast in a mottled green and brown patina, with a dappled and textured surface, Oval Form (Trezion) gives the impression of an object or being that has resurfaced from the sea, its hollow interior reminiscent of a rockpool, a cave, or a spiraled shell she may have found upon the beaches that surrounded her home. There is a wonderful sense of movement and animation with Hepworth deploying what appears to be a continuous curling line, which gives an impression of the work in constant flux, as if it is alive or floating under the sea. Hepworth explained her connection to the landscape and the effect that it had one her work: ‘The works I do are a mixture of an ideal situation in shape and spontaneity reacting to landscape and a feeling of evoking how I feel, myself, bodily in relation to this landscape, evoking a response in the beholder to the position of man, spiritually, mentally, in his landscape and relating to the universe’ (B. Hepworth, quoted in S. Bowness (ed.), Barbara Hepworth: Writings and Conversations, London, 2015, p. 175).

This sense of experience was important for Hepworth who believed that one should experience sculpture not only visually, but sensually and spiritually. Although abstract in form Hepworth never lost a humanistic quality in her work, which she saw was intrinsic to her sculpture. Indeed one of the strengths of Hepworth’s works is the duality between abstraction and naturalism. Alan Wilkinson reiterates, ‘Hepworth’s sculptures should be perceived as semi-abstract equivalents of elements of landscape and architecture, and of bodily sensations in relation to them. They are evocative rather than literal representations of the waves breaking on Porthmeor beach, or the rhythmic patterns of Greek mountains and valleys, or the movement and spaces between the columns of the Acropolis’ (A.G. Wilkinson, Barbara Hepworth, Toronto, 1991, p. 22).

What is perhaps most striking about Oval Form (Trezion) is Hepworth’s utilisation of space and light, with the sinuous curled lines revealing an open centre, in which light can filter through. Space is now inseparable from form, with the hollow centre highlighting the tension of volume in space and the delineation of line and plane. These humanoid apertures are also reminiscent of the holes made in stones and shells by the sea. Hepworth explained, ‘The carving and piercing of such a form seems to open up an infinite variety of continuous curves in the third dimension changing in accordance with the contours of original ovoid and with the degree of penetration of the material’ (B. Hepworth, quoted in ibid., 1991, p. 20).

The complexity of form and interplay between mass and void only became possible when Hepworth began working in bronze in the 1950s. This allowed Hepworth to extend her repertoire of forms, granting her the opportunity to create more linear, open and transparent shapes that would have been impossible to realise in stone and wood. Bronze allowed her the lightness, flexibility and freedom to create forms evocative of the ebb and flow of the waves and the roughness of the rocky coastline, as seen in Oval Form (Trezion). Dedicated to carving Hepworth only began to appreciate the sculptural possibilities of bronze in the late 1950s, she recalled, ‘It took me nearly thirty years to find a way of using it …I found the most intense pleasure in this new adventure in material ... I had always hated clay and never previously liked any bronze casts of forms modelled in clay. But now I felt free to enjoy the making of the armature. I could blend it with my carving technique – by building up the plaster of Paris and then cutting it down as though carving …By treating the plaster as if it was oil paint with large flat spatulae, I built surfaces which I could then cut down when hard. This method gave me the same feeling of personal surfaces as when I prepare the boards on which I draw and paint’ (B. Hepworth, quoted in S. Bowness (ed.), Barbara Hepworth: Writings and Conversations, London, 2015, pp. 158-59).

The present work is the only cast of Oval Form (Trezion) in a private collection and therefore offers a rare opportunity for sale at auction. Other casts of the work are in the collection of The British Library, London; Abbot Hall Art Gallery, Kendal; Aberdeen Art Gallery, Aberdeen; Rijksmuseum Kröller-Müller, Otterlo; the Franklin D. Murphy Sculpture Garden at the University of California, Los Angeles; The Museum of New Zealand, Te Papa Tongarewa, Wellington; and Kimbell Art Mueum, Fort Worth, Texas. 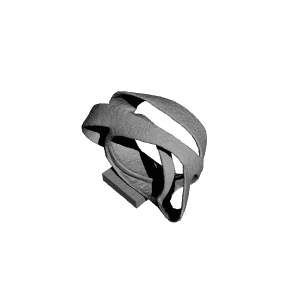