This is the bust of Ra, the Egyptian god of Sun.

In later Egyptian dynastic times, Ra was merged with the god Horus, as Re-Horakhty ("Ra, who is Horus of the Two Horizons"). He was believed to rule in all parts of the created world: the sky, the earth, and the underworld. He was associated with the falcon or hawk. When in the New Kingdom the god Amun rose to prominence he was fused with Ra as Amun-Ra. During the Amarna period, Akhenatensuppressed the cult of Ra in favour of another solar deity, the Aten, the deified solar disc, but after the death of Akhenaten the cult of Ra was restored.

The cult of the Mnevis Bull, an embodiment of Ra, had its centre in Heliopolis and there was a formal burial groundfor the sacrificed bulls north of the city.

All forms of life were believed to have been created by Ra, who called each of them into existence by speaking their secret names. Alternatively humans were created from Ra's tears and sweat, hence the Egyptians call themselves the "Cattle of Ra." In the myth of the Celestial Cow it is recounted how mankind plotted against Ra and how he sent his eye as the goddess Sekhmet to punish them. When she became bloodthirsty she was pacified by mixing beer with red dye. 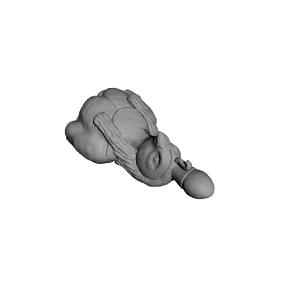 Printed with Form Futura EasyWood™ Ebony on a Zortrax M200 using a Z-Temp temperature control. 190µ layer thickness, 225º extrusion temp, no bed heat. The sculpt is awesome but the model could be improved by making the breastplate an integral part of Ra's chest. As it is now, it's separated from the body by a gap, so the breastplate is quite thin and easily damaged during support removal. Speaking of support, it's a real stretch to say that this is "support-free"; it required quite a bit of support, at least with the Zortrax slicer set to 45º threshold. But it wasn't a big deal and removed easily. Thanks for sharing!