This portrait relief depicts Joseph Mayer (1803–1886), an English goldsmith, antiquary and collector. The son of Samuel Mayer, a tanner and currier, he was born at Newcastle-under-Lyme, Staffordshire. At the age of 20 he settled in Liverpool as a jeweller and goldsmith: successful in business, he was able to indulge his passion for collecting. In 1860 he devoted himself to the volunteer movement and was captain of the Liverpool borough guard. He raised and clothed at his own expense a corps of volunteers at Bebington, near Birkenhead, Cheshire, where he went to live in 1860. Mayer retired from business in 1873, and died unmarried at Pennant House, Bebington, Cheshire, on 19 January 1886, aged 82. His private library, prints and manuscripts were dispersed by auction in 1867.

This relief was based on the Fontana's bust portrait of the sitter (No. 7599, the same collection) 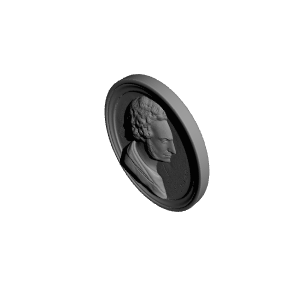