Artificial lighting was commonplace in the Roman world. Candles, made from beeswax or tallow, were undoubtedly the cheapest means of lighting, but candles seldom survive archaeologically. Lamps fueled with olive oil and other vegetable oils survive in great numbers, however, and have been studied in minute detail. Some Roman lamps were made of metal, and could be of highly elaborate forms incorporating statuettes and multiple nozzles, but fired clay was the most usual material, and the majority of small, probably inexpensive, clay lamps had a single nozzle for one wick, and therefore one flame.

Most of these clay lamps were shaped using moulds in workshops that turned out large numbers of standardised products. Some of the most popular forms incorporated a central discus, a circular area usually around 4–6 cm. in diameter, that incorporated the filling-hole and could be ornamented with pictorial motifs in low relief. The range of decoration included pagan deities, myths and legends, genre scenes from everyday life, animals, hunting, public entertainments such as gladiatorial combat and chariot-racing, erotic encounters, and in late-Roman times, some Christian symbolism: in short, the full range of subjects that occur in the Roman decorative arts (Jewish lamps with symbols such as the menorah are also found). 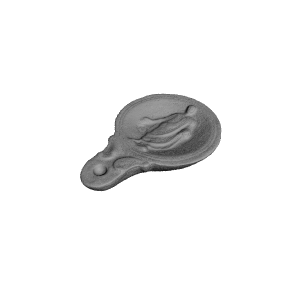 ×
1 collections where you can find Roman oil lamp par ArcheoPablo