Saint George and the Dragon

Saint George and the Dragon

In 1508, Michel Colombe received a commission for a marble altarpiece for the high chapel at the Château de Gaillon, dedicated to Saint George, patron saint of Cardinal d'Amboise. He transcribed into relief the pictorial image of the saint slaying the dragon and delivering the captive princess. This first large Italianate relief, in which the sculptor has not yet mastered perspective, nature, or fantastic creatures, shows a desire for compositional clarity and unity heralding the Renaissance.

George, a Roman officer, has just crossed Trebizond, a land terrorized by a dragon demanding a daily tribute of young people to devour. As fate would have it, the victim chosen that day is the princess. George joins battle with the beast, runs it through with his lance, and frees her. George, a completely fictitious figure, became the patron saint of knights. Worship of the saint spread, particularly in Europe, after the first Crusades.

Most of the work of the illustrious French sculptor Michel Colombe has unfortunately disappeared. The two surviving pieces known to be by him are the tomb of Duke Francis II of Brittany (1502-07) in Nantes Cathedral, the fruit of a prestigious commission by Anne of Brittany, then queen of France, and this relief of Saint George. The piece was commissioned by Cardinal Georges d'Amboise, the archbishop of Rouen and Louis XII's minister, who turned his chateau at Gaillon in the Eure region into a center of the early French Renaissance. He had wanted to honor his patron saint with this marble altarpiece destined for the high chapel of his chateau. The relief was executed in 1509-10 in Tours, where the sculptor, then an old man, had his studio. After the high chapel, along with part of the chateau, was destroyed during the Revolution, the marble remains, including this relief, were acquired by the Musée des Monuments français in 1797. They entered the Louvre in 1818.

The first great relief of French sculpture is at the turning point between the Gothic era and the early Renaissance. Colombe has transcribed a pictorial image into relief but has not yet mastered perspective: the clumsy succession of planes with the princess too small in the middle distance, his difficulty using relief, the overly prominent volumes of the saint and dragon, and his timidity in the representation of nature, which is suggested merely by a few clumps of mushroom-like trees on a rock. The costumes, the knight's armor, and the princess's surcoat - fashionable during Anne of Brittany's reign - are contemporary. The dragon, straight out of the Gothic imaginary bestiary, is more marvelous than terrifying. The attention paid to the rich ornamental detail - the dragon's wings, the horse's harness, the knight's chain mail and armor - are worthy of the last great Gothic image-maker. But the concern for compositional clarity and unity foreshadow the Renaissance. The foliation, bucranes, grotesques, and candelabras on the frame, typical of Italian decorative motifs, are the work of decorative artists working at the Château de Gaillon, probably under the direction of the Florentine-born artist Jérôme Pacherot. The sober, light image of the valiant knight on horseback dominates the whole composition. His billowing cape is elegantly depicted. Although the horse is somewhat stiff, the head and neck are delicately modeled. The beauty of the detail does not compromise the unity of the action. 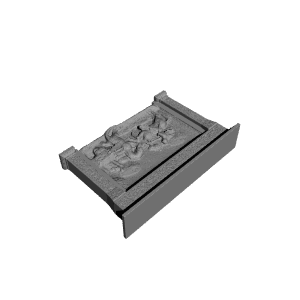