This anthropoid sarcophagus belonged to Usermontu, High Priest of Montu and Priest of Amun during the latter part of the reign of Ramesses II. A large sarcophagus of black granite was found inside his tomb in the Theban necropolis; presumably, this pink granite sarcophagus lay inside the larger one. This is an unusual object, as it was rare for private individuals in the New Kingdom to have stone sarcophagi.

Here Usermontu wears a long striated wig bound with a floral fillet and the long curved beard of divinity. His crossed hands hold a djed pillar, the symbol of stability associated with the god Osiris, and a tit amulet, invoking protection and sacred to Osiris's sister-wife Isis. Across Usermontu's chest is a broad festival collar. The inscriptions on the exterior are utterances of the protective funerary deities depicted on the sides: Thoth, Anubis and the Four Sons of Horus. On the interior, spells are inscribed for the protection of the body by the sky goddess, Nut, who is carved full-length on the floor of the box. 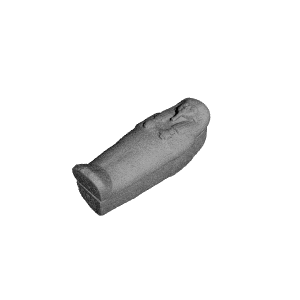