From around 4400 BC stone palettes made of siltstone, providing a flat surface on which body pigments could be ground, were deposited in ancient Egyptian burials. Between 3300–3000 BC, however, they were transformed into ritual objects with images associated with kingship carved in shallow relief on both sides. The most famous examples were excavated at the site of Hierakonpolis in southern Egypt and include the Narmer Palette (now in the Egyptian Museum in Cairo) and this example, the Two Dog Palette. Both objects are decorated with felines with long snaking necks – 'serpopards’ – that encircle the central grinding area. Those on the Two Dog Palette lick the body of a gazelle. Such fabulous creatures are also depicted on contemporary objects from Mesopotamia (modern Iraq).

The head of one of the dogs that frame the top of the palette is missing, and two drilled holes at the base of the neck suggest that it was repaired in antiquity. On the reverse of the palette, a mixture of fabulous and real wild animals occupy the left-hand side of the scene from where they attack a range of herbivores native to North Africa. From the top, there are a pair of lions, a serpopard, a leopard, a hyena and a griffin with comb-like wings. At the bottom is a long-tailed dog-like creature wearing a belt and playing an end-blown flute. Presumably some of the imagery was carried to Egypt along trade routes, perhaps as seal impressions on containers, and the exotic creatures were adopted by Egypt’s early kings to express their otherworldly status and power. 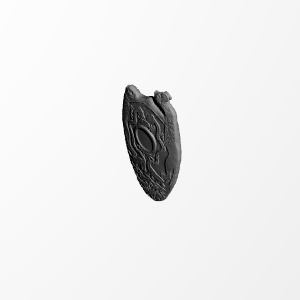