Peace and Wealth, shown as mother and child. Pausanias, the Greek travel writer of the second century CE, wrote about a sculptor called Kephisodotos who made a sculpture of “Peace holding the child Wealth in her arms” for the Athenians. It was made of bronze and stood in the Agora. This is a Roman copy, and the child’s head may not belong. The original was probably created to coincide with the foundation of a cult of Eirene in 374 BCE, when peace was made with Sparta, or in 371 BCE when a peace was signed between all Greeks.

Eirene standing nearly frontal, with her weight on her left leg, and her right leg relaxed, wearing a peplos, a himation draped over both shoulders (seemingly attached where peplos is fastened), long hair, some rolled around a taenia, ampyx revealing itself at front, earrings (metal attachments?), and thick-soled sandals, turns her head to a 3/4-view, tilted down, to look at the baby Ploutos, cradled in her left arm, along with the keras; Ploutos, seated 3/4-view to the left, wearing a himation draped over his knees, lower legs, and thighs where he sits on the arm of Eirene, legs crossed, with his head shown in 3/4-back-view to the left, tilted up to look at Eirene, reaches his right arm up to Eirene, and his left arm down at his side. 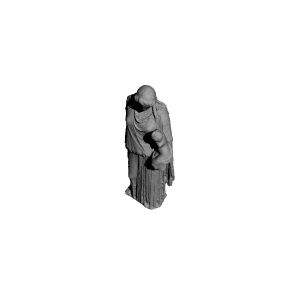