The story goes that King Agamemnon had to sacrifice his daughter Iphigeneia to the goddess Artemis in order to have a favourable win for Troy. The story is well known from Greek myths and from the tragedy “Iphigeneia in Aulis” by Euripides from the 400s BC. The statue group shows the goddess Artemis, who at the last minute saves the young girl Iphigeneia, by dragging her away from the altar on which she is about to be sacrificed. Artemis grabs the antlers of a deer and hauls the animal into her place.

The original marble, housed at the Ny Carlsberg Glyptotek, the statue of the goddess was originally covered entirely in gold leaf, while Iphigeneia's dress was painted in vivid colours. The statue came from Turkey, but was found in a park, the so-called Garden of Sallust, in ancient Rome in which the emperors brought together works of art from various parts of the Empire, some legally obtained, others acquired by outright looting. 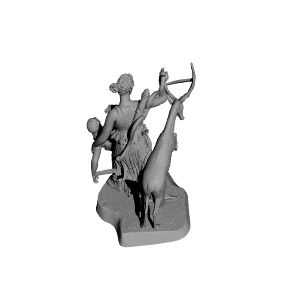