The metope which describes the collection of the Apples of the Hesperids (the fouth on the East side) is composed of the strong vertical elements: Athena on the left, Herakles in the middle temporarily supporting the Heavens and Atlas, who has just returned from collecting the apples, on the right. Athena appears more mature here than the youthful figure in the Lion and Stymphalian Birds Metopes and wears a simple, ungirt Doric peplos without armor or shoes. She faces forward but turns her head to the right, toward Herakles, while raising her arm to take the burden of the heavens from Herakles as once again he changes places with Atlas. Herakles, also clearly more mature than he appeared in the earliest metopes in the series, is shown in profile facing right. The cushion on his shoulder has enabled him to bear the weight more easily. Atlas closes the right side of the composition, facing right toward Herakles. His arms are held forward full of the golden apples, the location of the tree which produced them a secret known only to him. The scene takes place as the Labor is about to be completed, in a characteristically Early Classical manner. 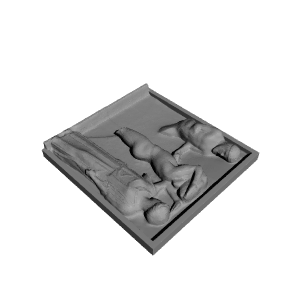 I enlarged the model to 300mm and cut it apart into 100x100mm sections to fit inside my printer. Afterwards I glued the pieces together on a cardboard scrap. I then (sloppily) filled the seams and painted it with a terra-cotta color. I'll probably rework the metope to properly conceal the seams and print lines, but it looks great hanging on the wall right now.