3D
360°
Featured Scan The World
3,196 views 353 downloads
7 collections
Community Prints Add your picture
Be the first to share a picture of this printed object
0 comments

Percival Ball studied at the Royal Academy and exhibited from 1865 to 1882. He was awarded a medal in 1866 for his relief depicting The Brazen Serpent. Ball's marble, The Genius of Lancashire, now in the Manchester City Art Gallery, most closely resembles the present work. It is also a classical study of a nude and shares a purity of design and form. In 1879, Ball exhibited two works at the Royal Academy, one of which, the Bacchante, may be related to the present marble. 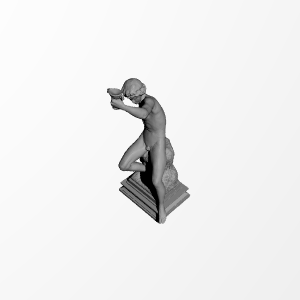 ×
7 collections where you can find Bacchus Da Janim