Bronze statue of a man at The Metropolitan Museum of Art, New York

Bronze statue of a man at The Metropolitan Museum of Art, New York

This is a bronze statue of a man originating from Greece and made in the Hellenistic period (mid 2nd-1st Century B.C.). The imposing figure, approximately one-and-a-half times life-sized, probably once held a spear in his right hand. His pose clearly depends on the iconography of nude Hellenistic ruler portraits in the tradition of the famous late fourth-century B.C. statue by Lysippos of Alexander the Great holding a spear. The identity of the figure remains uncertain, although scholars have suggested a number of possibilities. It well may represent one of the Hellenistic rulers of Pergamon such as Attalos II (r. 159-138 B.C.) or Attalos III (r. 138-133 B.C.).

The subject also has been idenfified as Alexander I Balas (r. 150-145 B.C.), the ill-fated Syrian usurper, or less likely, a Roman republican general, perhaps Lucullus. The monumental scale suggests that the statue was likely commemorative, erected in recognition of an important event such as a military victory and set up in a public space. 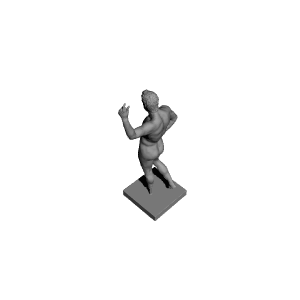