This stone rhyton (container from which fluids were intended to be drunk or to be poured in some ceremony such as libation) in the born of a bull's head is a masterpiece of Minoan art, worked with great precision to render the natural features of the real animal. The snout is outlined with an inlay of white seashall, while the (preserved) right eye is inlaid with rock crystal, with rim and iris of red jasper.

This vessel would have been used for libations, as indicated by the hole in the neck for filling and the corresponding hole in the snout for pouring out the liquid. Discovered in the Knosses-Little Palace. The left side of the head and both horns have been restored.

The art of stone carving, which had suffered a decline in the Old Palace Period, was revived and perfected in New Palace times. Many fine works of art were produced this time. 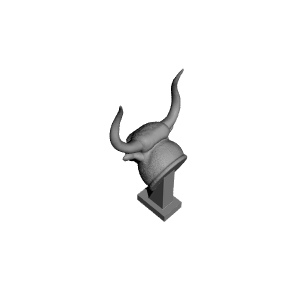 I mixed it a bit to make a staff