Bust of a Child

3D
Scan The World
3,404 views 472 downloads
Community Prints Add your picture
Be the first to share a picture of this printed object
0 comments

Bust of a Child

This is a plaster cast of a marble original portrait bust of a child probably by Desiderio da Settignano, made in about 1455-1460 in Florence (Italy).

The bust was purchased in Italy in 1848 by Eugene Piot and passed through the collections of Paul van Cuyck, Charles Timbal and Gustave Dreyfus, before entering the National Gallery of Art with the Andrew Mellon Collection. Traditionally ascribed to Donatello (1386-1466), the attribution to Desiderio, first suggested by Perkins in 1869, is now generally accepted. The bust is dated to 1455-60 because of stylistic analogies with the putti on Desiderio's Marsuppini tomb of c. 1453-60 in S. Croce, Florence (of which a cast, museum no. 1891-129, is in the V&A's collections), and with the Blessing Christ Child of S. Lorenzo Tabernacle of 1461.

Desiderio da Settignano, (Desiderio de Bartolomeo di Francesco detto Ferro (c. 1428 or 1430 – 1464) was an Italian sculptor active during the Renaissance.
He came from a family of stone carvers and stonemasons. His work is influenced by Donatello, but very likley he was trained in the large Florentine workshop run by Bernardo and Antonio Rossellino. 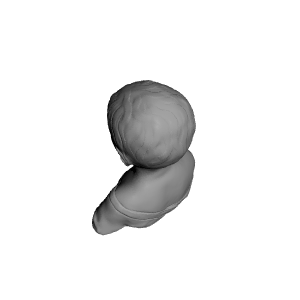