3D
Featured Scan The World
5,615 views 803 downloads
8 collections
Community Prints Add your picture
Be the first to share a picture of this printed object
0 comments

This bust is a copy of the bronze Roman copy, created after an original Hellenistic work of the 1st century BC. It was discovered in the Villa of the Papyri in the ancient city of Herculaneum and is housed in the Museo Archaeologico Nazionale, Naples.

Considered one of the loveliest of bronze busts discovered from Herculaneum, its identity is still under consideration. The head does not resemble the busts usually accepted as portraits of Plato, and the style would seem to place it under a much earlier date than Plato. Both Furtwangler and Lenormant believe it to be an original of the fifth century.

The head, which came from a room south of the tablinum, seems once to have formed part of a statue. The first and delicate modelling of cheek and brow, and the technique of the whole work is a revelation of method. The very chisel-marks can be seen on the exquisitely finished beard, and on the thick hair, tucked up like that of the Lemnian Athena, with the broad fillet binding the brow and pressing into the abundant masses of hair.
As to the identification of the bust, it might well be the head of the god Dionysus, brooding upon the mysteries known only to the initiate, and revealed to the vulgar in the fierce ecstasies of the Bacchic revels.

Lenormant (a 19th-century French assyriologist and archaeologist), however, attributes to bust fo the great Dorian School, which flourished at Tarentum, and whence so many works of art found their way to Rome when the town was sacked by Fabius Maximus in BC 209. He further conjectures, with some probability, that it may represent a Poseidon, a deity especially venerated at Tarentum. Vase paintings and coins of Tarentum certainly show us Poseidons somewhat resembling this head. 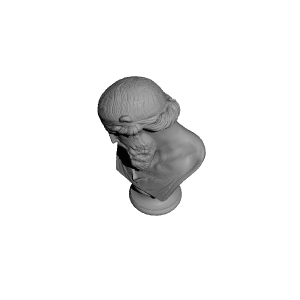 ×
8 collections where you can find Bust of Dionysus, Priapus, Plato or Poseidon Da SMK - Statens Museum for Kunst