Bust of the Younger Faustina

3D
Scan The World
1,487 views 126 downloads
Community Prints Add your picture
Be the first to share a picture of this printed object
0 comments

Bust of the Younger Faustina

This is a copy after a Roman bust in the Capitoline Museum, Rome. Bartolomeo Cavaceppi (1716-1799), the author of this portrait, has restored the Roman work for Pope benedict XIV in the 1740s and produced several copies.  Faustina was a daughter of Roman Emperor Antoninus Pius and Roman Empress Faustina the Elder. She was a Roman Empress and wife to her maternal cousin Roman Emperor Marcus Aurelius. She was held in high esteem by soldiers and her own husband and was given divine honours after her death. 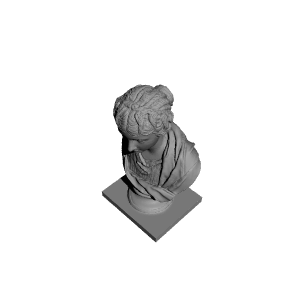