3D
Scan The World
1,595 views 132 downloads
Community Prints Add your picture
Be the first to share a picture of this printed object
0 comments

Jesus[e] (4 BC – c. AD 30/33), also referred to as Jesus of Nazareth or Jesus Christ, was a Jewish preacher and religious leader who became the central figure of Christianity. Christians believe him to be the Son of God and the awaited Messiah (Christ) prophesied in the Old Testament.

He came from a family of stone carvers and stonemasons in Settignano, near Florence. Although his work shows the influence of Donatello, specifically in his use of low reliefs, it is most likely that he received his training in the large Florentine workshop run by Bernardo and Antonio Rossellino. Desiderio matriculated into the Arte dei Maestri di Pietra e Legname, Florence's guild of Stone and Woodworkers, in 1453 and shortly thereafter already was supplying cherub head medallions for the frieze running across the front of the Pazzi Chapel in the second cloisteryard of the Basilica of Santa Croce. 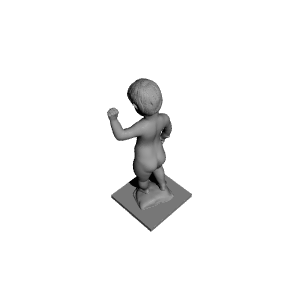