Crucified Christ (no base)

3D
Scan The World
2,388 views 353 downloads
1 collection Add to collection
12 0
Community Prints Add your picture
Be the first to share a picture of this printed object
0 comments

Crucified Christ (no base)

According to the canonical gospels, Jesus, the Christ, was arrested and tried by the Sanhedrin, and then sentenced by Pontius Pilate to be scourged, and finally crucified by the Romans. Jesus was stripped of his clothing and offered wine mixed with either myrrh or gall to drink before being crucified. He was then hung between two convicted thieves and according to Mark's Gospel, died some six hours later. During this time, the soldiers affixed a sign to the top of the cross stating "Jesus of Nazareth, King of the Jews" which, according to the Gospel of John, was in three languages. They then divided his garments among them by casting lots or, according to the Gospel of John, by dividing his garments but cast lots for his seamless robe. After Jesus' death, only according to the Gospel of John, one soldier pierced his side with a spear to be certain that he had died. The Bible describes seven statements that Jesus made while he was on the cross, as well as several supernatural events that occurred. 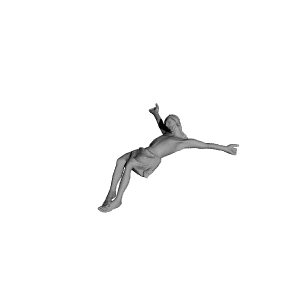