"Fiery" Figrin D'an (alias Barbarine) was a male Bith who was the leader of the band the Modal Nodes and the younger brother of Barquin D'an. Specializing in Jizz music, Figrin played a reed instrument known as a Kloo horn, as well as a percussion instrument called a Gasan string drum. Like his band mates, Figrin was registered with the Intergalactic Federation of Musicians (IFM). Regions of Figrin's highly evolved brain allowed him a special acuity when it came to analyzing and relating to music. In fact, the Devaronian music fan Labria called him possibly the greatest klooist in the galaxy. As such, his talents helped to greatly enhance the quality and popularity of the Modal Nodes' music.

No support print. The print i present in the pictures is a 8cm bust with a 0,2 layer height. Much better detail results can be achieved on bigger scales and bigger resolution of course. 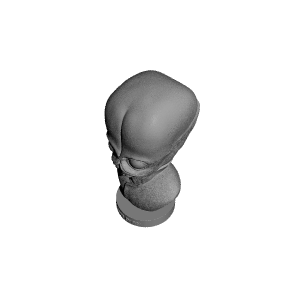 Cool print and fun to paint.