3D
Scan The World
1,951 views 187 downloads
3 collections
Community Prints Add your picture
Be the first to share a picture of this printed object
0 comments

Florence Nightingale (1820–1910) was an English social reformer and statistician, and the founder of modern nursing. She came to prominence while serving as a manager and trainer of nurses during the Crimean War, in which she organised care for wounded soldiers. She gave nursing a favourable reputation and became an icon of Victorian culture, especially in the persona of "The Lady with the Lamp" making rounds of wounded soldiers at night.

The statue is a subsidiary part of the Guards Crimean War Memorial. 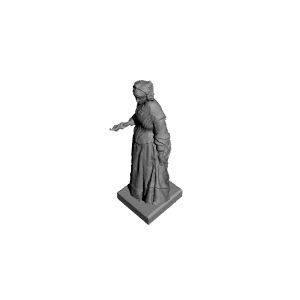