Funerary Sculpture of Amenemheb, Mayor of Thebes, with his Wife and Mother

3D
Featured Scan The World
1,677 views 162 downloads
Add to collection
6 0
Community Prints Add your picture
Be the first to share a picture of this printed object
0 comments

Funerary Sculpture of Amenemheb, Mayor of Thebes, with his Wife and Mother

This is the only monumental family group from the time of the Egyptian New Kingdom to be found in the Hermitage. It is an example of the post-Amarna art of the successors to the reformer pharaoh Akhenaten or of later time. Cut from a single block of grey granite are three figures seated on a bench, with wigs on their large heads. In the centre, as we learn from the hieroglyphic inscription on the robe, sits "Chief Scribe of the King, his beloved... overseer of the granaries of Amun, the late Prince of the City [i.e. Thebes], Amenemheb born of Kalo." He wears the official attire characteristic of the time - a shirt with broad sleeves falling in folds, and a long apron. To the right of Amenemheb sits his mother, "Singer of Amun, lady of the house, the late Kalo". To the left of the ruler of Thebes is his wife, high priestess of the temple of the goddess Hathor, "Singer of Amun", "the late Taisennefert". The women are embracing Amenemheb's shoulders, a gesture indicating relationship. According to tradition, all three broad, round, slightly flattened faces are identical. In order to convey the folds of the fine, transparent pleated fabrics of the official garments, deep engraving was used, destroying the unity of the stone surface. Amenemheb with his Wife and Mother is a superb example of Theban sculpture. The tomb is on the west bank of the Nile at Thebes. This sculptural group also includes texts from The Book of the Dead. 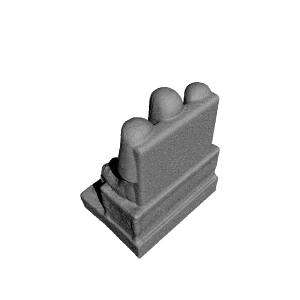 ×
0 collections where you can find Funerary Sculpture of Amenemheb, Mayor of Thebes, with his Wife and Mother Da Scan The World