The identification of this head as a portrait of Alexander the Great is derived from Plutarch, who wrote that only Lysippos was permitted to make a likeness of him, and portrayed him “with leonine hair and melting upturned eyes”.

The interpretation that Alexander is shown in his death throes demonstrates the Renaissance desire to find in ancient sculpture illustrations of ancient history; the expression and pose are more dramatic than we would expect to find in a portrait.

The style of the work justifies ascribing the origin to the last period of Greek art before the Alexandrine. This connects it with the schools of Rhodes and Pergamun, with the Laocoon and The Dying Gaul. The discovery of the Pergamene marbles has further contributed to the work being an archaeological enigma. 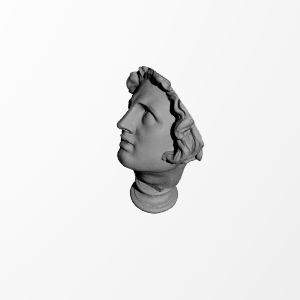