This noble figure of a youth is one of the earliest freestanding marble statues from Attica, the region around Athens. It is a type of sculpture known as a kouros (male youth), characteristically depicted nude with the left leg striding forward and hands clenched at the side. Most kouroi were made in the Archaic period, between the late seventh and early fifth centuries B.C., and are believed to have served as grave markers or as dedications in the sanctuary of a god. 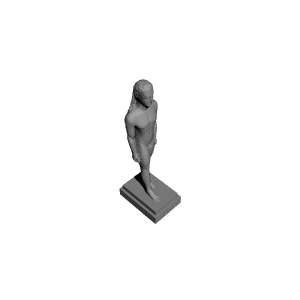 ×
3 collections where you can find Greek Kouros at the MET, New York Da Metropolitan Museum of Art
×
Scott Correia
@Joe_Snuffy
0
Posted at: 17th May 2022

Printed nicely with now support, learned that I have stringing issues to contend with, but a great looking statue.