3D
Scan The World
2,738 views 194 downloads
2 collections
Community Prints Add your picture
Be the first to share a picture of this printed object
0 comments

This powerful portrayal of a man of action belongs to a type popular in Roman times. One suggestion for his identity is the strategos (general) Phokion, pupil of Plato and one of the foremost Athenian statesmen of the fourth century B.C., but there is little evidence to support that theory. We do not know if the original statue was a contemporary portrait, like the famous fifth-century portrait of the Athenian statesman and general Perikles, or a posthumous work. It could even be a representation of a hero from the mythic past. he wears a Corinthian helmet pushed up and resting on the back of his head. The helmet is elaborately decorated in relief with griffins on the bowl and rams' head on the cheek pieces and his similar to a type worn by the goddess Athena. His eyes would have been inlaid in another material. The head has been worked for insertion into a statue.

It is a marble sculpture from the Roman Imperial period, 1st-2nd cenutry A.D. and is a copy of a greek bronze statue of the mid-4th century B.C. 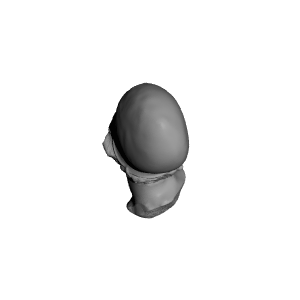