3D
Scan The World
1,031 views 74 downloads
Community Prints Add your picture
Be the first to share a picture of this printed object
0 comments

This head-portrait sculpture depicts Andrew William Mellon, sometimes A.W., was an American banker, businessman, industrialist, philanthropist, art collector, and politician. From the wealthy Mellon family of Pittsburgh, Pennsylvania, he established a vast business empire before transitioning into politics. He served as United States Secretary of the Treasury from March 9, 1921, to February 12, 1932, presiding over the boom years of the 1920s and the Wall Street crash of 1929. A conservative Republican, Mellon favoured policies that reduced taxation and the national debt in the aftermath of World War I.

Davidson later noted that when portraying financier Andrew Mellon, Mellon and the artist discussed the terms of the arrangement, "in a businesslike manner, befitting a Secretary of the Treasury." To Davidson, Mellon's "fine face, delicate complexion, white hair and moustache, suggested stone or terra-cotta." But Mellon responded, "I prefer bronze," and then suggested, "You will do it in bronze, and if I don't like the bronze, you will do it in terra-cotta or stone?" Davidson agreed. When the clay model for the bronze was completed, Mellon expressed his satisfaction, and on receiving the bronze, was "very pleased with the finished work." 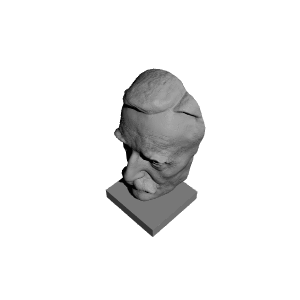