3D
360°
Scan The World
3,689 views 585 downloads
6 collections
Community Prints Add your picture
Be the first to share a picture of this printed object
0 comments

This is a sculpture depicting Hercules, a Roman hero and god, in a moment of shooting his bow. He was the equivalent of the Greek divine hero Heracles, who was the son of Zeus (Roman equivalent Jupiter) and the mortal Alcmene. In classical mythology, Hercules is famous for his strength and for his numerous far-ranging adventures.

Hercules used his bow when firing at the Stymphalian birds, the destruction of which was the sixth of his Labors. These voracious creatures ate human flesh, had brazen claws, wings and beaks and used their feathers like arrows. Their habitat was a lake near Stymphalus in Arcadia. On hearing of the task that Hercules had been allotted, Athena provided the hero with a brass rattle, by the noise of which he startled the birds, killing them one by one with his arrows as they flew away. 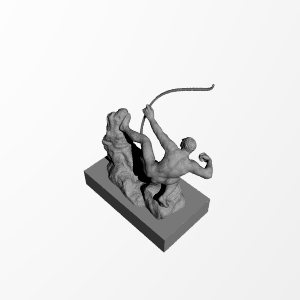