3D
Scan The World
3,323 views 141 downloads
Community Prints Add your picture
Be the first to share a picture of this printed object
0 comments

This is one of the earliest marble statues of a human figured carved in Attica. The rigid stance, with the left leg forward and the arms at the side, was derived from Egyptian art. The pose provided a clear, simple formula that was used by Greek sculptors throughout the sixth century B.C. In this early figure, almost abstract, geometric forms predominate; and anatomical details are rendered in beautiful, analogous patterns. The statue marked the grave of a young Athenian aristocrat.

This marble statue of a kouros (youth) is originally Greek from the Attic style, ca. 590-580 B.C. Said to be from Attica. 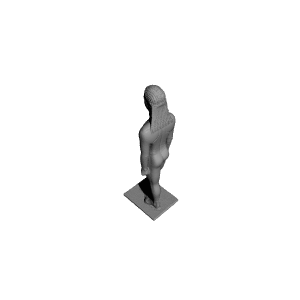