3D
Scan The World
4,352 views 290 downloads
1 collection
Community Prints Add your picture
Be the first to share a picture of this printed object
0 comments

The origins of Moore’s evocation of the spirit of the famous Winged Victory of Samothrace could hardly have been more prosaic. Yet the simple principle of visualising a completed – indeed monumental – work from a fragment of natural material was unquestionably one of the sculptor’s strong points. In this case he simply added a base and head of plasticine to a piece of chicken bone before enlarging it in three stages. The largest version has become the best known, particularly in dramatic settings where the extreme contrast of breadth and thinness in the figure interacts with the panorama to sublime effect, while perspective changes as the viewer moves around it.

First conceived in 1961, this work might be considered to be the logical end-point of Moore’s exploration of the solitary, vertical piece, beginning with the existential Standing Figure (LH 290) of 1950 and including a whole series of abstract Upright Motives: an appropriate return to Nature through the utilisation of its very forms. 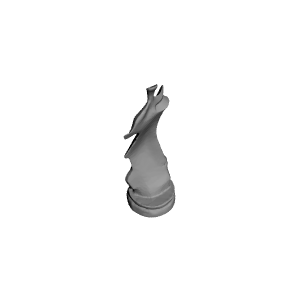