Lucretia at The Metropolitan Museum of Art, New York

3D
Scan The World
3,143 views 193 downloads
Community Prints Add your picture
Be the first to share a picture of this printed object
0 comments

Lucretia at The Metropolitan Museum of Art, New York

This is a marble sculpture by Philippe Bertrand (1663-1704) originating from France, probably Paris, before 1704. According to ancient history, Lucretia was a virtuous Roman patrician who was raped by Sextus Tarquinius, son of the last king of Rome. She stabbed herself after suffering this indignity and her death ushered in the abolition of the monarchy and the establishment of the republic. The episode's relevance to monarchial France is unclear but the reclining format allowed a bravera re-enactment of the expiring heroine's acceptance of the dagger's thrust; she kicks one leg free as an involuntary response. Bertrand showed the marble at the Salon of 1704. 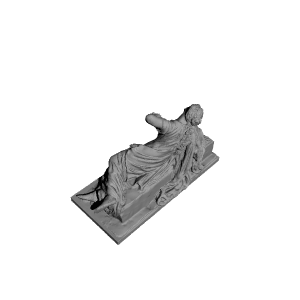