3D
Scan The World
2,910 views 275 downloads
4 collections
Community Prints Add your picture
Be the first to share a picture of this printed object
0 comments

A standing male figure is represented in the act of stabbing his neck with a short sword while supporting with his left hand a dying woman who falls forward at his side. The two figures, easily identified by their long curly hair and by the woman's oriental stule of dress, rest on typical Celtic arms: an oval shield and the sheath of a sword.

The intrpretation of the two characters as Gauls (or Galatians) a Celtic people of Asia Minor, has linked his work to the famous scultpure of the Dying Gaul now in the Capitoline Museums. They could have both belonged to a single sculptural group, a marble copy of the original bronze by the famous artist Epigonos, commissioned by King Attalus I to celebrate his victory over the Gauls in 240 BC.

The two sculptures the Gaul killing himself and his wife and the dying gaul probably come from the area of the Villa Ludovisi where in Roman times werre llocated the gardens of Sallust, formerly of Caesar. The place of their discovery very close to the residence of Caesar, suggests that they are to be considered symbolic copies commissioned by Caesar in memory of his victories over the Gauls,a  Celtic people od the west. 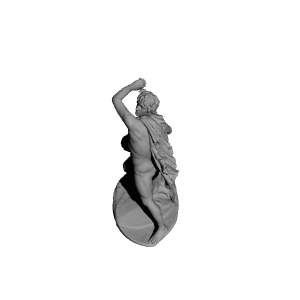