Marble and Limestone Statue of an Attendant at The Metropolitan Museum of Art, New York

3D
Scan The World
2,126 views 77 downloads
Community Prints Add your picture
Be the first to share a picture of this printed object
0 comments

Marble and Limestone Statue of an Attendant at The Metropolitan Museum of Art, New York

This young woman held an object in her right hand, perhaps a fan. The statue was originally likely part of a funerary group of an aristocratic woman with her attendant that would have served as a tomb marker. It was not uncommon during the Hellenistic period in Southern Italy to carve the heads of significant commissions in imported marble and use local limestone for the bodies. The Greek city of Tarentum had a particularly distinctive sculptural tradition of limestone funerary monuments, other fragmentary examples of which can be seen in the nearby case for luxury arts of Southern Italy. 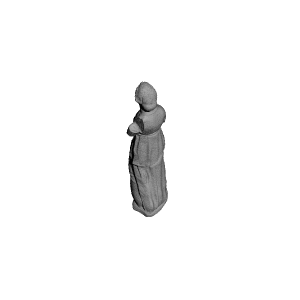