Marble Bust of a Gentleman in Armour

3D
360°
Featured Scan The World
1,316 views 105 downloads
2 collections
Community Prints Add your picture
Be the first to share a picture of this printed object
0 comments

Marble Bust of a Gentleman in Armour

This is a man who clearly has everything: an aristocrat, depicted in robust health, with all the signs of power, wealth and sophisticated taste. Or at least that is how he wanted to be commemorated and remembered. His stern expression and direct, almost challenging, gaze, combined with the large shoulders, accentuated by the lion-mask epaulettes, create an imposing impression. How could he still be anonymous?

The strength, confidence and sobriety of this gentleman all recall the severe atmosphere of the Spanish court under the rule of King Philip II. The aesthetics of this period were equally restrained as is demonstrated by his short, rather flat hair, small pointed beard and the relatively plain decoration of his armor, especially when compared with contemporary Italian metalwork with was typically more highly-worked and flamboyant. The artist was clearly heavily influenced by Leone Leoni (1509-1590) and his son, Pompeo Leoni (1533-1608), among the most celebrated and high-profile sculptors working in the second half of the 16th century, and for the Holy Roman Emperor Charles V and his son King Philip II, in particular.

The connection to the Leoni’s is particularly pronounced when comparing the armor of the present bust to the armor of the full-length figure of Charles V and another bust of Charles V, both in Prado (Los Leoni (1509-1608): Escultores del Renacimento italiano al servicio de la corte de España, exh. cat., Madrid, 1994, no. 4 and figs. 7-9). Both the full-length figure and the bust have armor with pronounced lion-mask epaulettes, like the present bust, and, additionally, the full-length figure even has the protruding teeth that are so prominent in the present bust. The bust’s epaulettes have smaller, but still distinctive, teeth as well. Another comparison is a marble bust of Charles V in the Prado, by Montorsoli and dated 1541, whose armor is incised in a manner similar to the present bust (E-288). Both Montorsoli’s bust and the present bust have incisions that are thin, shallow and appear slightly uncertain, when compared to the most accomplished chiseling of the period. A final comparison is the bust of Philip II, again in the Prado’s collection, this one in bronze and attributed to the sculptor Jacques de Jonghelinck, which depicts Philip II in armor also with pronounced lion-mask epaulettes, this time of an even more exaggerated size than the present bust, but slightly more naturalistic in manner than in the present bust (Ibid., no. 20). So it would appear that both the artist and his patron were well-aware of the busts being created for the Spanish court and both would have wanted any viewers to note the aesthetic connection as well.

Due to the political chaos of the Italian peninsula in the second half of the 16th century, and Spain’s near-constant state of war in Italy and France, there were no shortages of Spanish military heroes. So there are no shortage of plausible candidates for this bust. But, while both this gentleman and the artist remain unknown, this is still a powerful and psychologically penetrating moment in late-Renaissance sculpture – just before the high-Baroque innovations of Bernini and Algardi changed sculptural portraiture forever. 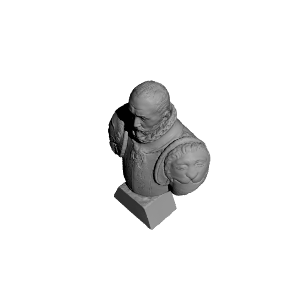