3D
Scan The World
3,024 views 210 downloads
2 collections
Community Prints Add your picture
Be the first to share a picture of this printed object
0 comments

This marble bust of a priest originates from Rome and was created in the Hadrianic period, A.D. 117-138. This intense figure can be identified as a priest by his headdress, a rolled fillet with a raised round diadem at the center. The mannger in which his toga is folded, with a thick band crossing his chest, indicates that he was a priest of the god Serapis. A seven-pointed star would have been painted on the round diadem. Serapis, a fusion of the two Egyptian deities Osiris and Apis, was assimilated to such Greek gods as Zeus, Hades, and Asclepius by the Greek-speaking Ptolemaic rulers in Alexandria during the Hellenistic period. During the Roman period, his cult spread throughout the Mediterranean world together with that of his consort, Isis. 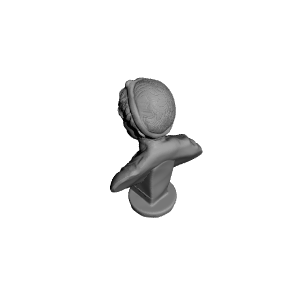